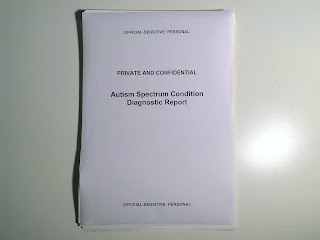 Three Years On In a few months, it will be three years since I got my autism assessment results.

I’ve previously written about the assessment process itself, but that post was mostly factual. This time, I want to focus on how it felt, and what impact it has had on me from an emotional point of view.

Before being assessed, I’d heard that some people can find the process to be quite difficult emotionally — almost traumatic.

At first, I couldn’t really understand why, because the assessment process sounded fairly straightforward: just fill in a questionnaire, go and chat to a clinical psychologist a few times, then put them in touch with anyone who knew you as a child.

I had to do some rather bizarre things during some of the sessions, like describing the pictures in a children’s story book, and making up stories using props such as string and paper clips. Occasionally, it felt like I was on a hidden camera show — as though there were people in a secret room somewhere, watching me and l…
Post a comment
Read more

My Rant From 2013: How Virgin Media Treat the Widowed 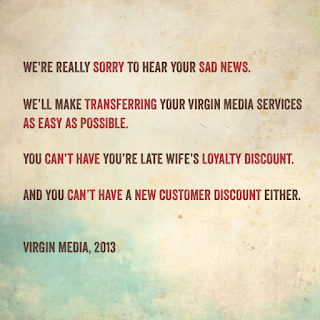 Several years ago, not long after my wife died, I posted a few articles on one of my old websites. A few years later, I closed the site, and I feel like it’s time to make those articles available once more.

This one is from October 2013, and it’s about the trouble I had with Virgin Media. I hope that they treat widowed customers better nowadays, than they did back then.

[Note: For privacy, I’ve changed my wife’s name to Jane.]
Transferring Utility Accounts After Jane passed away, I had to contact quite a number of utility companies and financial institutions.

We’d lived at the same address for nearly 20 years. Some bills were in joint names, and others were in just one name. For those that were in Jane’s name, in general, it’s not been too much trouble to get things changed over to me. But in one particular case, things have been especially difficult.

They provide our phone, TV and internet services. This is a long story, but there is a good outcome – eventually!

How I Lost My Soul Mate in My Forties, Then Found I Was Autistic 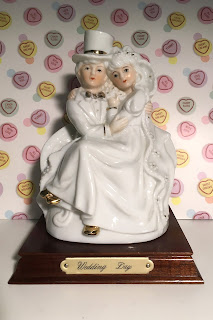 Soon, it will be ten years since my wife Jane was diagnosed with secondary breast cancer, from which she died three years later. Back then, everything was fairly normal around here; sometimes it’s hard to believe that, because it seems like a lifetime ago. We were both working, and raising two children. Life seemed good, and we were happy.

I’ve not really written about being widowed on this site before, so I thought I’d start with our early years together, and finish with our last days together.

[Note: For privacy, I’ve changed my wife’s name to Jane.]
The Early Years We met in 1992, after I answered a lonely hearts advert — remember this was long before the days of online dating sites. Jane and I got along incredibly well right from the start, and she chose not to meet any of the other men who’d replied.

It might be a cliche, but Jane had a smile that could light up a room. And when she turned that smile on me, on the first night that we met, I felt like the luckiest man in the world. 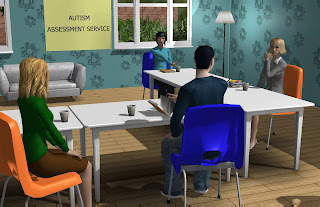 In this post, I share my experience of the NHS autism assessment process for adults in the United Kingdom, which I went through a few years ago when I was 48 years old. I focus on the process itself, from initial thoughts, right through to receiving the final report.

Details about my life, and my reaction to the report, will be covered in another post — this one is long enough already!

Hopefully, it will be of interest to those who are considering getting an assessment. Luckily, I made some notes at the time, which proved useful when writing this — I don’t think I would have remembered very much otherwise!
Initial Awareness (2014) It was back in the summer of 2014, when I first became aware that I might be autistic. Before that point, I knew virtually nothing about autism.

Things began when I attended a talk on Autism and Anxiety by Dr Luke Beardon. I was there simply to support my girlfriend, whose son has PDA syndrome. 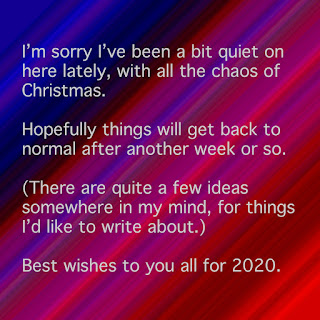 I’m sorry I’ve been a bit quiet on here lately, with all the chaos of Christmas.
Hopefully things will get back to normal after another week or so.
(There are quite a few ideas somewhere in my mind, for things I’d like to write about.)
Best wishes to you all for 2020. 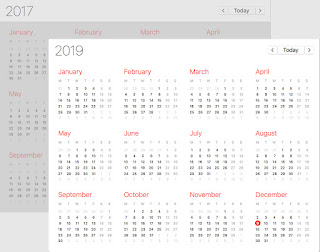 Since September 2017, I've written quite a few posts on my Facebook page.

Recently, after starting this blog in November 2019, I thought it would be nice to add those old posts here. (Very few people have read them, and I think they are still relevant.)

I spent some time thinking about what to do about the dates. If I publish them using the current date, the articles will appear newer that they really are, and won't be in the correct date order, which could be misleading.

On the other hand, if I use the original dates, this site will appear to have been here for longer than it really has, which could be misleading in a different way. Also, the republished posts might appear old, get lost and be ignored.

In the end, I decided to go with the second approach, and republish the posts using the original dates, with a minimal amount of editing.

In an attempt to be clear about things, at the end of each old post, I will add a brief note which mentions the original date and current da…
Post a comment
Read more 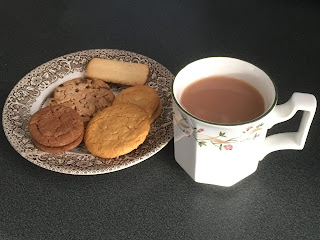 Many months ago, I found myself wondering what it might be like to meet up with a group of autistic people. I wondered how successful it could be, given that the members would be people who tend to find social situations difficult. And would it be enough, to have nothing but autism in common?

Back then, searching online revealed one or two groups within my area, but they all seemed to meet up in the evenings. As a widowed parent with very little support, that meant I couldn’t easily go, because my children were too young to be left alone. So given that I had some doubts, it didn’t seem worth the effort of trying to arrange childcare.

Recently, I started realising that my situation has changed, because my children are old enough to be left alone for an hour or two. So I found a group that meets up every week in a small cafe, and went to see what it was all about. (It’s been a while since I’ve put myself outside of my comfort zone, by doing something like this!)
Meeting New PeopleWhen meet…
Post a comment
Read more 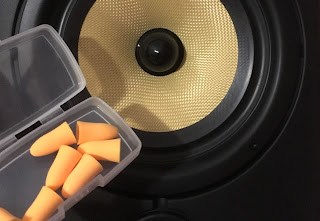 Too Loud, or Not Too Loud? Music was, and I suppose still is, quite an important thing to me. As a child, I remember feeling so many emotions, listening to chords and vocal harmonies in songs.

Music can lift my mood, and help me to deal with feelings such as sadness more quickly, by listening to music that reflects my mood.

I like the sound quality to be good, but I'm not someone who spends thousands on hi-fi equipment. Also, I often like music to be quite loud (but not deafening).

Something which puzzles me is that when I go to a family birthday party, the music playing at the disco will often hurt my ears. If the equipment is turned up too loud — beyond its capabilities — the resulting distortion is unbearable to me!

But yet I seem to be the only person affected. Everyone else at the party will be chatting away, enjoying themselves. And I'm covering my ears up, unable to hear what anyone is saying to me!

And at home or in the car, people often say that I play music a bit…
Post a comment
Read more

My Life Story in Brief 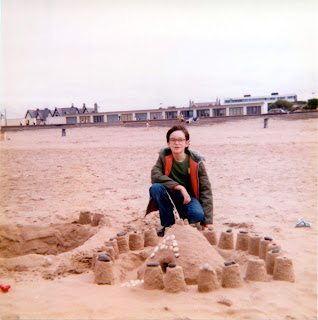 I went through mainstream school and college, and found it difficult to socialise with others. I had no support — nobody knew why I was the way I was.

At best, I was typically described as being quiet and shy.

After school and college, I got a job, and got married. Life was good, and seemed normal to me. But then my wife was similar to me — we didn't really socialise with others.

After about 15 years, she got diagnosed with an incurable cancer, and died a few years after that, leaving me all alone in the world again. The one person who I depended on for everything was gone!

A year or so after losing my wife, I heard about autism, and realised it seemed to describe me. So I got in touch with my GP, and went through the gruelling process of being 'tested'.

They concluded that I have an Autism Spectrum Condition. That explained so much about the difficulties I've ha…
Post a comment
Read more

Autistic Widower
I lost my wife to breast cancer when I was 44 years old. She was everything to me, and losing her was devastating. I found myself struggling in social situations in my new life without her, and happened to attend a talk about autism. To cut a long story short, a couple of years later, I got assessed, and was diagnosed as autistic. I'm here to share thoughts, experiences and feelings, hoping to help others. You can also find me on Twitter: @AutisticWidower and on Facebook: www.facebook.com/AutisticWidower